The Humble Indie Bundle has proven many times over that getting Indie games AND donating to useful groups like the EFF and Child's Play works!

Pay what you want and get three great games; Voxatron, Blocks that Matter, and The Binding of Isaac. Soundtracks are also downloadable for the latter two games!

To help celebrate the Humble Indie Bundle, go ahead and build some free paper toys of characters from these games.

Cubeecraft has already released two characters from The Binding of Isaac - Isaac himself (stricken with fear) and the disgusting Monstro, a mini boss that will crush you! Click on the images to download your own!

Now you can download and build the main Robot Hero from Voxatron in Cubee form! 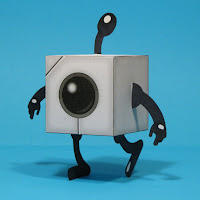 Also, have a go at making Tetrobot from Blocks That Matter -- pop the parts in and out to make him pose in several different ways!
Posted by Josh Buczynski

Just a quick note to let you know that a link to this post will be placed on CraftCrave today [04 Nov 02:00am GMT]. Thanks, Maria

Learn about Poplocks, the free-to-make paper building system!
CONTACT ME
Need help? Do you want to commission a design? Head over to the Contact Page to learn more.