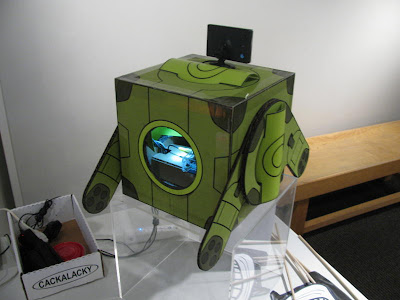 Sharebot is a photo-taking mini computer, powered by a Rasperberry Pi and a Raspberry Pi camera and assembled and programmed by my friend Joe Diver. We've taken Sharebot to Engineer's Day at the Durham Museum of Life and Science and the Burlington Mini Maker Faire. We let parents and children take pictures of themselves or their Poplock creations and the pictures are then shared on a flickr album for everybody to see! 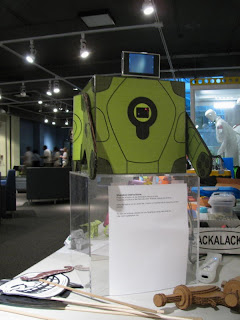 One of the coolest user features is that the picture-taking is triggered with a Wii Remote. The Raspberry Pi receives Wii Remote input using a Bluetooth adapter and an open-source program call CWiid.

See the pictures Sharebot took at the Burlington Mini Maker Faire! Check out the album.

We will be bringing the Sharebot to SPARKcon in Raleigh on Sunday Sept 15th. More info on which tent we will be in soon!
Posted by Josh Buczynski

Learn about Poplocks, the free-to-make paper building system!
CONTACT ME
Need help? Do you want to commission a design? Head over to the Contact Page to learn more.